Have you tried shrimp and grits? Its a classic comfort Southern dish with many renditions! I've had the dish with assorted seasonings, lots of veggies and of course so many different types of cheeses! But of course, all versions have perfectly spiced shrimp and the creamiest, cheesiest grits! Well, I couldn't leave my beloved Indian spices out of such a classic dish! So to turn shrimp and grits into an Indian infused dish, I made shrimp tikka masala with cheesy gobi grits (cauliflower grits) and it is amazing!

I started traveling to Atlanta for my first job and I just fell in love with Southern cuisine! Everything was so delicious! Biscuits, fried green tomatoes, all the peaches!, fried chicken, and of course shrimp and grits. I honestly am not sure I had ever even tried shrimp and grits before I got out of college. What I really loved about the dish was that no two versions were ever the same. So I knew I just had to play around with myself!

What is Shrimp Tikka Masala?

First off, tikka masala is a dish originating in India. The most widely known variation is of course chicken tikka masala. It involves marinating the protein (chicken, paneer, shrimp) in a blend of spices, roasting the protein, and then adding the roasted, spiced protein to a creamy tomato based curry sauce.

Shrimp tikka masala involves marinating shrimp in a tikka masala seasoning before searing. Then add the seasoned shrimp to a coconut and tomato curry sauce.

What Ingredients are in Shrimp Tikka Masala?

Actually as complicated as it may seem, shrimp tikka masala is a pretty straightforward recipe. Just a handful of ingredients.

Shrimp - fresh or frozen work well in this recipe. I do suggest that you use shrimp that is peeled and deveined so its just easier to eat

Canned coconut milk - coconut milk replaces the heavy cream that is typically found in tikka masala recipes. It is lighter and healthier than cream.

Aromatics: onions, garlic, ginger, to give you all the classic flavors of spice and heat of a curry sauce

How to Make Shrimp Tikka Masala

This shrimp tikka masala dish gives you the comfort of Indian tikka masala with quick cooking shrimp. It is actually a much quicker meal to prep than the chicken tikka masala that you're most used to. If you have all your ingredients prepped and read to go, the dish will come together so quickly!

Other delicious shrimp dishes you might be interested in: Saucy Shrimp with Feta and Olives, Shrimp and Scallop Scampi, Perfectly Grilled Shrimp

Tikka masalas are most typically paired with naan or basmati rice, but its not unheard of to pair these deeply seasoned dishes with spicy veggies like potatoes or cauliflower! And so instead of adding a spicy tadka (seasoned oil) to cheesy grits, I thought it would pair better with cauliflower grits!

If you liked this shrimp tikka masala with gobi grits, check out these other amazing cauliflower dishes: 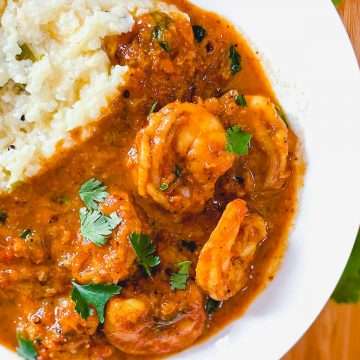 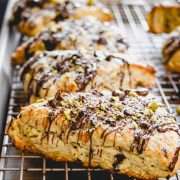 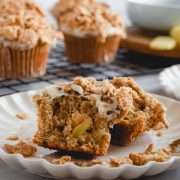 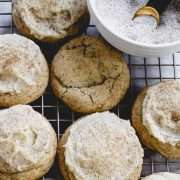